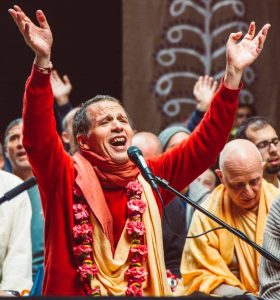 Sacinandana Swami has been a monk in the bhakti tradition for 50 years. He is known for his significant contribution to the practice of contemplation and meditation for modern practitioners of bhakti. Sacinandana Swami has published seven books and released two CDs, and offers an array of retreats, seminars, and workshops. Thousands of enthusiastic singers and dancers visit his kirtan concerts. He teaches at the Vrindavana Institute for Higher Education in India and the Bhaktivedanta College in Belgium. Furthermore, Sacinandana Swami serves as the spiritual guide for the Veda Academy, which is active in eight countries, and recently founded the organization, “Yoga Is Music”. Fond of India’s sacred pilgrimage sites, he annually goes there to seek personal inspiration. Although his pilgrimages have taken him all over the subcontinent, he is particularly fond of the sacred land of Vrindavan, the birthplace of Lord Krishna.

As a child, Sacinandana Swami had an innate spirituality to him even at a young age. He would, for example, climb very high on trees to the point where the fire department had to be called to help him get down. When asked why he would do this, he would answer his parents, “I want to be closer to God.” Eventually, this spirituality was something that years down the line as an adult his spiritual master recognized within Sacinandana Swami.

In his teenage years, before he began to answer his spiritual calling, he lived the life of a normal teenager growing up in the midst of all the changes and revolutionary ideas around the world. Sacinandana Swami was fond of music and would attend concerts with his friends, and it was at one such concert where he began to realize what it was that he felt was missing from inside. After Sacinandana Swami and his friends snuck into a concert by The Rolling Stones in Hamburg, Germany, he witnessed an ascetic man, a monk of a Buddhist tradition, sitting on the ground as he and several other concert goers left the area. Despite the life he had lived up to that point, it was there that Sacinandana Swami remembers that he had a significant turning point. He deeply admired and long for the self-discipline that the monk possessed. In his words, he knew he did not want to lead a material life. He wanted a life of spiritual inner awareness. In many ways, he wanted an inner-revolution and not an exterior revolutions like those he witnessed in those years.

Getting on the path was a challenge that Sacinandana Swami had to overcome. He saw himself first as a divided man, divided between the world he came from and the spiritual world he wanted to establish a connection with. Although wanting to fully answer his spiritual calling and go all the way with his studies so that he too can become a teacher, he felt drawn to the world of western music, and western ideas. Sacinandana Swami was a fan of rock and roll and loves classical music, particularly works by J.S. Bach. To fully devote himself to this new path he sought out proper training from a spiritual master who would be able to guide him. Sacinandana Swami moved into the ashram that was established by the International Society for Krishna Consciousness (ISKCON) in Hamburg. There, Sacinandana Swami began his formal spiritual training, taking part in daily routines of studying scriptures, singing, lively discussions, and performing selfless deeds.